One of the main goals of dairy operations is to maximize economic efficiencies. Proper nutrition for dairy cows plays a vital role in making this happen. An important aspect of nutrition that helps dairymen and nutritionists understand milk production and milk composition potential is the particle size of a herd’s total mixed ration (TMR). Most ration formulation programs give an estimate of physically effective neutral detergent fiber (peNDF); however, many farmers and nutritionists know all too well that the diet on paper does not always match the diet that is being fed. One simple way farmers can ensure that their cows receive the proper amount of peNDF is by using a Penn State Particle Separator to analyze their TMR.

Importance of fiber in the diet

Neutral Detergent Fiber (NDF) is used to estimate the total fiber content in feedstuffs by measuring the amount of cellulose, hemicellulose, and lignin in the plant cell wall. The term peNDF was created in 1997 by Dr. Dave Mertens of the US Dairy Forage Research Center. This term was developed to specifically measure the fraction of fiber that stimulates chewing and contributes to the floating mat of large particles in the rumen [1]. The peNDF in the TMR is directly correlated to milk fat concentrations. Diets high in peNDF promote rumination and the production of saliva, which acts as a buffer to raise rumen pH. High rumen pH increases production of volatile fatty acids, especially acetate and butyrate, which are used to synthesize short chain fatty acids that contribute to higher milk fat concentration. Knowing a diet’s particle size is key to understanding its peNDF potential. Long forage particles, such as hay, are great for stimulating rumination, but if particles are too large there is a risk of cows sorting and not eating the entire formulated TMR. On the contrary, if feed particles are too small they will pass directly through the rumen without stimulating rumination [2].

Until 1996, the only way to measure particle size was through a complex laboratory procedure. The Penn State Particle Separator (PSPS) was developed to achieve the same measurement through a simple, on farm procedure (Figure 1). An instructional video by Dr. Jud Heinrichs explaining how to use the PSPS is available online (https://www.youtube.com/watch?v=d-vPe8QuE34). The original particle separator was made of three pieces: a 19-mm sieve, an 8-mm sieve, and a bottom pan. In 2002 a fourth piece, a 1.18-mm sieve, was introduced in order to better characterize small feed particles. Use of the 1.18-mm sieve was based on evidence supporting the idea that this size was the critical threshold for ruminal stimulation, as particles smaller than 1.18 mm were believed to be rapidly digested or pass directly through the rumen. However, recent studies have shown that the critical threshold for high-producing cows to ensure rumination is closer to 4 mm. In 2013, the PSPS had an alternative third sieve with 4-mm pores. The addition of this sieve allowed for on-farm analysis of peNDF.

In the latest version of the PSPS, peNDF can be calculated by adding the total weight from the top three sieves and multiplying the total by the NDF content of the feedstuff [3]. If this number does not match the predicted amount of peNDF that the ration is formulated for, farmers and nutritionists should reevaluate their mixing procedure.

To calculate peNDF using the 4-mm sieve, the top three sieves were added together and then multiplied by the NDF content of the TMR. The formulated diet was predicted to have a dry matter NDF value of 30.88% (according to AMTS v. 4.7.1), but the analysis of the diet showed the dry matter NDF value to be 29.0%.

Penn State University dairy researchers recommend that 60-70 percent of the NDF content of the TMR should be considered physically effective as measured using the 4-mm sieve. Currently, the TMR tested in the Illinois trial is at 60.5%, which is at the lower
end of the recommended range. This tells us that we need to slightly increase our particle size, to possibly see an improvement in our milk fat composition. Also, it is important to note that using a 1.18-mm sieve may overestimate actual peNDF in the diet, as seen in the calculations above. Make sure that you are using the correct sieves in order to evaluate peNDF in your TMR.

The Penn State Particle Separator is an excellent on-farm assessment tool for evaluating the physically effective fiber content of a ration. Data from Penn State University, Japan and Canada, as well as three independent labs, has clearly shown that the 4-mm sieve is more accurate when assessing the peNDF value of high producing dairy cows. Based on these findings, the University of Illinois Dairy Focus Lab recommends using the 4-mm sieve to analyze peNDF. The 1.18-mm sieve is still useful for analyzing the amount of very fine particles in a diet, but does not provide the farmer with an accurate representation of peNDF.

Another way to assess peNDF in a TMR is by monitoring cow fecal scores. Make sure that your cows have an average fecal score of 2.5-3.5 on a scale from 1-4. In the University of Illinois trial mentioned above, the cows averaged a fecal score of 2.93 ± 0.37.

If the particle size is not meeting the recommendations, the farmer should evaluate the mixing procedure. The most common mistake, which is easy to fix, is either not mixing enough or mixing it for too long. The order in which the ingredients in the TMR are mixed is also extremely important. The general rule of thumb is to add dry forages first, silage second, and grains and concentrates last. Farmers who still experience issues with particle size may want to consider pre-chopping dry forages or reevaluating the chop length at harvest.

Remember that in order to manage one must have numbers. Help your cows and consultants by having your TMR numbers in hand! 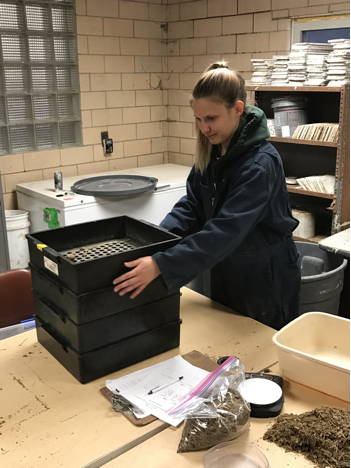