Corn silage is popular as a forage source for dairy cows due to its high energy and digestibility. It should have a light, pleasant smell with only a slight vinegar odor. Knowledge of the silage process often explains why some silage may be of poor quality. Once ensiled, the material starts to ferment and will continue to do so until enough acid is produced to stop bacterial action. The desired degree of acidity, a pH of about 4.2, should occur within 3 weeks after the silo is filled. Three different kinds of silage may be recognized according to the temperature during fermentation: 1) underheated silage is drab green in color and has a strong odor, slimy soft tissues and a pH of 5 or above; 2) overheated silage ranges from brown to black and usually has a caramel odor of slightly burned sugar; 3) properly heated silage is light green to yellow in color and has a vinegar type odor, firm plant tissues and a pH below 4.5.

Usually, a lot of attention is given to the grain portion of the corn being harvested for corn silage, but what about the leaves and stalk portions? Corn leaves are much more digestible than the stalk portion of the plant; thus, any additional leaves have the potential to increase the total digestible nutrients of the plant. The extra leaf area placed above the ear stays green and leads to a longer filling period for the kernels. Micro-organisms (bacteria) present on the aerial part of the plants are important for the fermentation process occurring in the silo. Researchers found that the total numbers of micro-organisms was higher on the leaves than on the stems in all phases of development of corn. Furthermore, the number of lactic acid bacteria increased with the growth of the plants. Fungi and yeasts can be detrimental for leaf health and can interfere with corn silage quality. 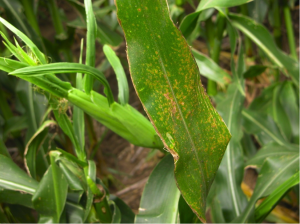 It has been reported that there is cellular content loss of infected corn leaves, and acid detergent fiber (ADF) and lignin content increase. All fungal diseases that attack the corn plant have the potential to reduce yield. Loss of dry matter because of tissue death, early plant death resulting in poor ear fill and small kernels, and stalk lodging can be caused by fungal disease and result in a reduction of yields and general quality. In addition, certain fungal disease organisms contaminate grain and stalks with mycotoxins, such as vomitoxin, causing serious quality problems. Leaf diseases on silage corn result in formation of lesions on leaves and can result in tissue death, including early death of entire plants, and increased susceptibility to stalk rots. Leaf diseases include northern corn leaf blight caused by Exserohilum turcicum, eyespot caused by Kabatiella zeae (Figure 1), common rust caused by Puccinia sorghi schwein, and gray leaf spot caused by Cercospora zeaemaydis (see some examples at: http://corn.agronomy.wisc.edu/Management/pdfs/A3879-02.pdf ).

Fungicides can be used to improve plant health resulting in higher grain (starch) yields, which is desirable whether the crop will be harvested for grain or silage. Corn fungicides are applied to inhibit foliar fungal infections. There have been limited fungicide studies with corn silage, although benefits derived for grain corn should similarly benefit corn silage producers. A 2007–2011 field trial conducted by University of Wisconsin Extension specialists showed that fungicide treatment resulted in a 0.7 ton gain in silage dry matter yield and a 1.9 percent boost in starch content. While these improvements were not statistically significant, they do appear to be biologically and economically encouraging. Overall, the highest source of variation from their analyses was observed at the farm scale, indicating that other factors (e.g., hybrid resistance, soil type, farm management practices) may influence yield response more than the use of a foliar fungicide. Ultimately, the best management tactic for reducing the risk of corn diseases is the use of a strategy that starts with hybrid selection for resistance to specific corn diseases. In addition, farmers should consider other factors like crop rotation and residue management as part of their management program. The researchers saw the best yield response to a foliar fungicide application (both within Wisconsin and across the region) when disease severity was higher (> 5%). Researchers from the University of Illinois led by Dr. Carl Bradley have found similar results in Illinois. Results from different plots have shown greater results in grain yield when disease severity was greater or equal to 10% (Figure 2). The plots had one fungicide application sometime between tassel emergence (VT) and silking (R1). 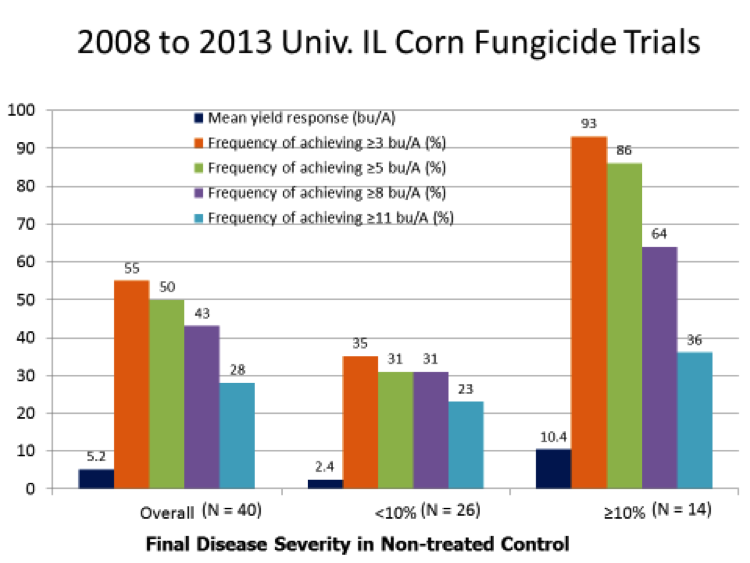 Farmers have also questioned if fungicide application would have any negative effect on the plants’ anaerobic bacteria populations. Anaerobic bacteria are responsible for fermentation in silages that are not inoculated with a commercial product. Experts at fungicide manufacturers confirm that the mode of action of fungicides has no detrimental effect on these anaerobes responsible for fermentation.

Another study done by the University of Wisconsin examined the effect of foliar fungicides on alfalfa production and quality. The authors found that second cutting alfalfa treated with Headline® had significantly lower disease percentage in the upper and lower canopy as well as a lower disease rating and lower defoliation percentage. The second cutting crops treated with the same fungicide had a higher milk production per ton of material and showed a tendency to have higher relative feed quality. However, results varied when tests were conducted in different counties and with different cuttings. As fungicide use is becoming more common, special attention needs to be given to label information. If fungicides registered for corn silage, such as Headline AMP, Quilt Xcel, or Stratego are considered, farmers need to pay close attention to the label for preharvest interval information.

Foliar fungicide application can have a great impact on milk production and farm overall profitability due to its ability to improve feed quality. Stay up to date with our research at www.dairyfocus.illinois.edu.