Some of the most important decisions dairy farmers make in a year are when and how to produce corn silage. Recently, a survey done by California researchers (Heguy et al., 2014) showed that in most cases, the decision about when to harvest corn for silage is made solely by dairy farmers. The choices made by farmers at that moment will impact cows’ feed for the rest of the year. Corn silage makes up about 30 to 40% of dairy cows’ diet. This forage is an important source of effective fiber and energy for the animals and its quality can vary widely even within the same corn hybrid. The corn needs to be ideal in maturity and size, and needs to be stored properly for the fermentation process to be optimal. Good ensiling can promote feed intake by cows and improve corn digestibility. Important factors which need to be considered when producing corn silage include the best time to harvest, processing method, and choice of inoculant.

The preservation of corn by ensiling consists of fermentation, with acid being produced until the low pH in the mass of chopped corn kills all microorganisms. Corn silage can stay preserved and with good quality for more than one year. For maximum fermentation and acid production, the bacteria need adequate moisture conditions to grow. Harvesting the corn plant when it is high in moisture (> 70%) can result in bad corn silage fermentation. On the contrary, if the plant has low moisture (< 60%), that can result in a corn silage with low digestibility.

The best time to harvest depends on several factors: hybrid, spacing between lines, and weather. Hybrids can offer a bigger or smaller “stay green” (the window of time that the corn plant stays in optimal point for cut). A longer stay green may help dairy farmers to better decide the perfect day to harvest, giving enough time to organize for the activity.

To decide when to harvest, farmers need to evaluate corn plant dry matter. The recommended dry matter (DM) content is 30 – 34% (70 – 76% moisture) for the whole plant. For upright silos, the DM should be slightly greater than for horizontal bunkers, as shown in a study performed by researchers from the University of Wisconsin (Table 1).

Table 1. Type of structure and optimal % dry matter for ensiling. 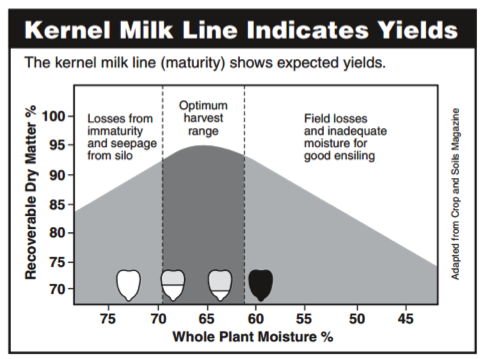 One easy and practical way to monitor DM of the corn plant is to check the milk-line. After fill, the kernel starts to lose moisture and one line (the milk-line; Figure 1) can be seen in the top of the kernel. With maturation the milk-line moves down, reducing the “milk” in the kernel, until it reaches the black line. The optimal DM level at which to ensile corn is 63%; this happens when the milk-line is at ¾ (Figure 2). The milk line usually changes 25% per week. 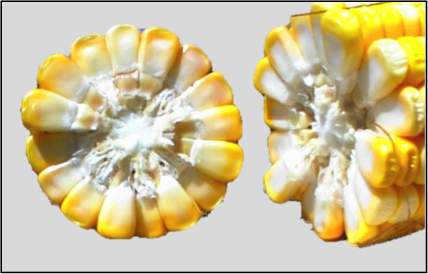 Another important decision to be made at the time of ensiling corn is regarding the particle length to which the plant is chopped. The main goal is to break or at least damage the corn grain. The particle length can usually be between 6 to 18 inches depending on the farm. Ruminants need long fiber – effective fiber that will stimulate rumination – to have a healthy ruminal environment. Combining an additional source of effective fiber (i.e. alfalfa hay, alfalfa haylage, straw, etc.) with a corn silage chopped at the shorter particle length would be the best way to go. However, if corn silage is the single fiber source at the farm, opting for a longer particle size may be the best thing to do. However, if the total plant particle size is too long, the ensiling compression can be compromised.

Damaging the corn grain is important when feeding cows because if the external portion of grain (pericarp) is intact, the microorganisms in the rumen can’t use the starch. Pericarp is a “barrier” that insulates and protects the starch. If the corn is not digested in the rumen by ruminal bacteria, it isn’t used by the cow. The Dairy Focus Lab recently visited several dairy farms in Illinois and collected corn silage samples. In our lab, we separated the corn grain from the corn silage to assess corn grain damage. The corn grain shown in Figure 3A will probably not all be digested in the rumen of the cow due to its physical consistency (not damaged). The corn grain shown in Figure 3B will probably be more digested since it is damaged. 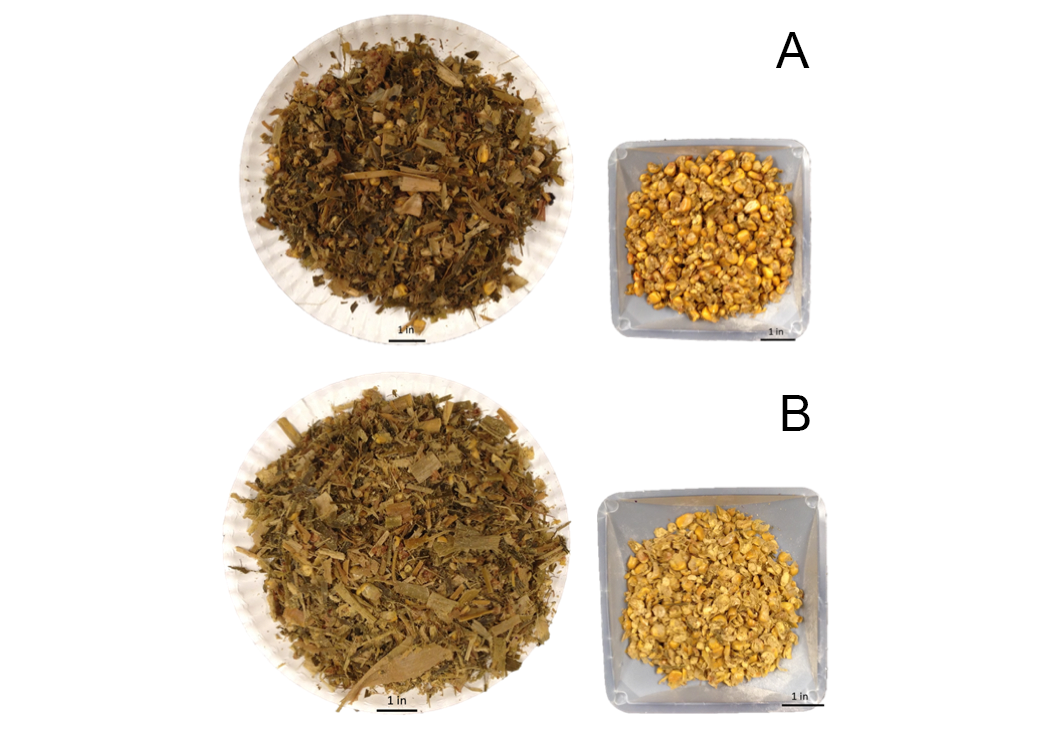 Figure 3. Unprocessed (A) and processed (B) corn silage.

There are two main options for damaging the corn grain: cutting the corn plant short or crushing it with the roller (compactor). Cutting it short may help to expose more corn starch, but the effective fiber of the corn silage will be missing. The harvesters’ knives should be sharpened almost once a day, depending on the material to be harvested and the equipment. Harvesters have implemented a roller for the purpose of breaking the grain when passing through it.

The space between rollers is critical and needs to be adjusted to a distance of 0.1 – 0.12 inches (~3 mm). The distance between rollers should be checked and adjusted whenever unprocessed (not damaged) grains start to be seen in the chopped material.

Farmers can check the quality of the corn silage process by collecting samples from the first wagon and assuring that at least 90% of the grain is damaged. This means that 90% of the grains have the kernel exposed (Figure 3B). Make sure to check the process periodically to guarantee that the rollers and the knives are still adjusted and sharpened.

A newer technology for producing corn silage is called Shredlage. In this method, the processor rips (shreds) the corn plant and the grain. 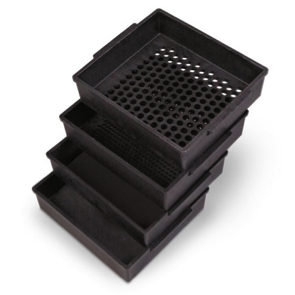 Determining the particle size at ensiling is very important and also easy to do. The Penn State Particle Separator (PSPS) (Figure 4, at right) is a set of four sieves with specific sizes that are correlated with animal nutrition (rumen function). The first step in analyzing particle size is to take approximately 10.6 oz (200g) of chopped corn or corn silage and damp it in the top sieve of the PSPS. Second, shake the box five times in each position and rotate two times as shown in Figure 5. 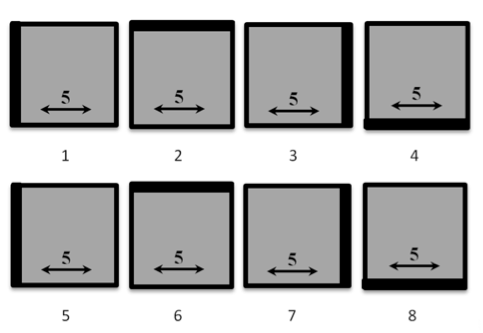 In Table 2, you can see the proportion retained in each sieve for good corn silage. More than 10% in the bottom (pan) sieve can increase the risk of your herd developing acidosis, whereas more than 10% in the top sieve can increase the risk for cows sorting. Our recommendation is that the total mixed ration (TMR) should have 50% or more of the material in the two upper sieves where the effective fiber is, since this material will be the one stimulating rumination.

The three corn silage samples collected from Illinois dairy farms shown below were processed using different methods: not processed, processed (using a roller), and produced with the Shredlage method. The proportion of the material retained in each sieve after passing it through the PSPS can be observed in Table 3, and the material that was present in each sieve can be seen in Figure 6. It is easy to see the differences among particle sizes due to different processes, especially in the upper sieve. The corn grain coming from the unprocessed and processed silage is shown in Figure 3.

Table 3. Proportion of DM in each sieve of the PSPS for silage that is unprocessed, processed, or produced using Shredlage. 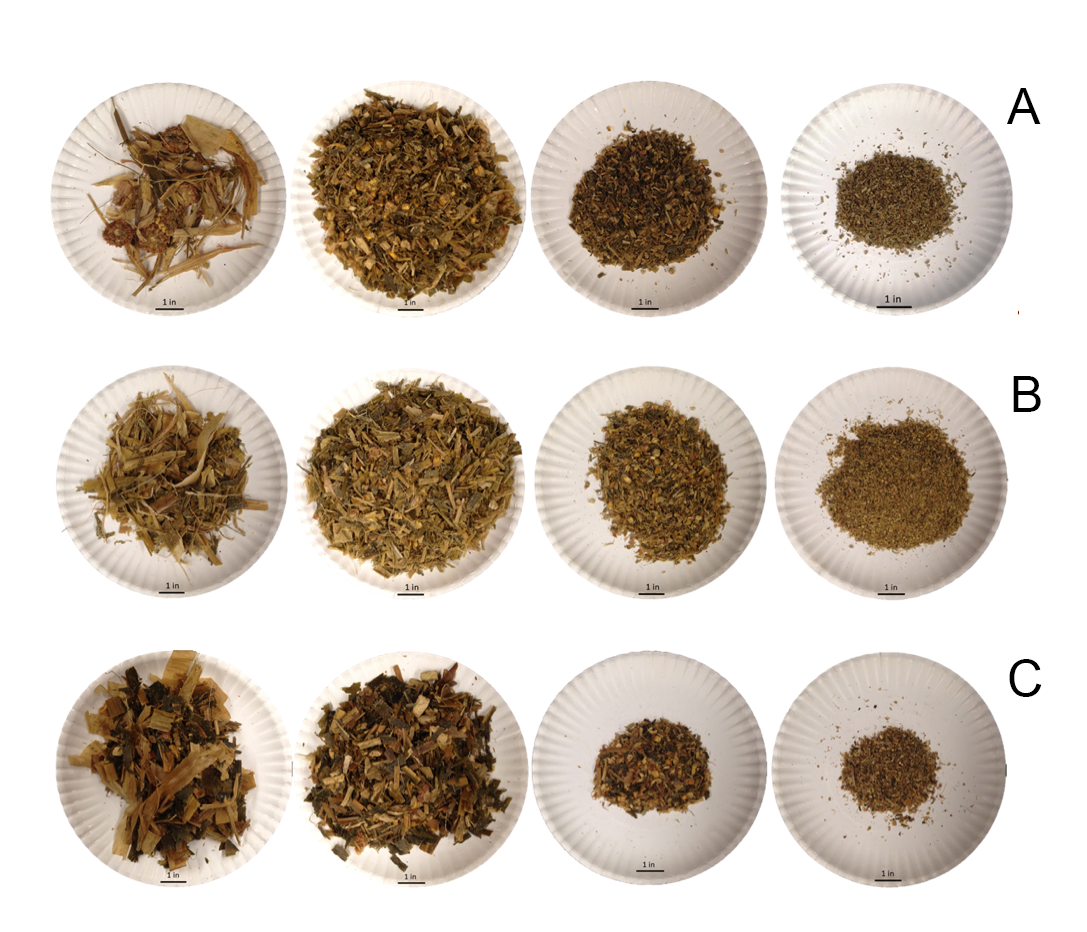 The ensiling process is designed for forage preservation. As highlighted above, in order to do that effectively the corn plant (or any forage) needs to ferment. There are two goals for ensiling: 1) preserve the nutrients and 2) improve feed value. To achieve both goals, the corn silage needs to be correctly sealed so there is no air re-entry and no growth of undesired microorganisms. The corn plant has naturally occurring microbiota composed of fungi, yeasts, and bacteria. The microbiota in the corn plant can change with region, hybrid, culture management, herbicide, and other factors. Each corn silage has a different fermentation process. Fermentation can be achieved even without the addition of inoculant. An inoculant is a product usually containing one or more strains of bacteria that can help with the fermentation process.

After the silo is closed the corn silage undergoes three different phases until its stabilization: 1) Aerobic phase, 2) Lag or growth of microorganisms phase, and 3) Fermentation phase, which continues until the stable phase is reached (Figure 7). In the aerobic phase, the bacteria that need air to survive die and the anaerobic bacteria increase. In the fermentation phase, the anaerobic bacteria break down the carbohydrate coming from the corn plant and produce acids. Lactic acid, acetic acid, butyric acid, and propionic acid can decrease the mass pH and kill all microorganisms resulting in the stabilization of fermentation, also known as the stable phase. The faster the pH decreases, the less carbohydrate is consumed by the microorganisms, leaving more carbohydrate in the material. Inoculants can be used to help the material to achieve the stable phase faster. 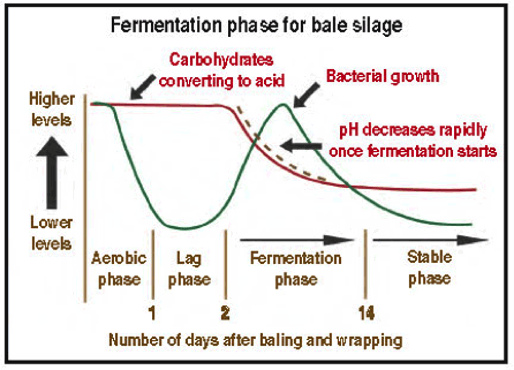 Corn silage that did not ferment well can limit cows’ intake and milk production. Mold, bad smell, and high temperature at time of feeding are some indicators of problems during fermentation. If the pH reduces too slowly during the fermentation process it allows for the perfect growth condition for clostridium bacteria. Clostridia are undesirable since they work against the corn silage preservation – they destroy lactic acid, allowing the pH to rise. The clostridia also decrease the nutritional value of the corn silage because they produce butyric acid, resulting in a putrid smell and high temperature.

Good corn silage fermentation can be enhanced by commercial inoculant formulations that are proven to increase the quantity of “good” microorganisms in the bulk. The options for inoculants are vast and change according to the microorganism(s) present in each product. Desirable bacteria are homolactic, meaning that they break sugar in just one end product: lactic acid, a strong acid that helps to reduce the pH. In this “team of bacteria” are Lactobacillus plantarum and L. casei. The heterolactic bacteria produce more than one end product. Besides lactic acid they produce other weak acids, alcohol, and CO2. The most used heterolactic bacteria in silage inoculant is Lactobacillus buchneri. The choice for the ideal inoculant will depend on what challenges the dairy farm faces regarding its corn silage. Some farms may have problems with spoilage; in this case, the homolactic acid bacteria are the most indicated because they are able to reduce the pH very quickly. However, if the problem is bad corn silage fermentation with the presence of butyric acid, farmers should select the heterolactic bacteria. Some bacteria of importance to silage fermentation are Enterococcus faecuim, responsible for starting the fermentation; Lactococcus lactis, responsible for reducing clostridia fermentation and scavenging oxygen; Lactobacillus plantarum, responsible for driving fermentation to low pH, and Lactobacillus buchneri, responsible for producing acetic acid that inhibits fungal growth.

The use of inoculant helps to improve the final quality of the corn silage. Using products that contain more than one strain of bacteria is beneficial due to the strains’ additive mode of action. Several products offered by the industry have that characteristic. Recent work published in the Journal of Dairy Science (Queiroz et al., 2013) tested eight additives in corn silage. The treatments with Lactobacillus buchneri and L. plantarum were the ones presenting greater acetic acid concentrations when compared to control silages (3.19 vs. 2.78% DM). Both aforementioned treatments had greater aerobic stability. Product prices change in accordance to the purpose of the inoculant but it is usually a small cost of ~ $1/ton. The relatively low cost of the inoculant and its easy application are other favorable factors that contribute to our recommendation for its utilization.