Infrared thermography (IRT) has been studied in other contexts for its ability to detect disease prevalence. Schaefer et al. (2007) demonstrated that by using IRT, especially of facial scans, temperature increases of 1.5°C to 4°C (P < 0.01) could be detected several days to one week before clinical scores indicated illness. This study suggested that IRT could be very useful in general disease detection, but may not be the best option to diagnose a specific affliction unless paired with other pathological metrics (such as immune parameters). Rainwater-Lovett et al. (2009) conducted a trial to determine if IRT can be used to screen for foot-and-mouth disease. The investigators observed warmer temperatures around the hooves in infected animals, which could not be attributed to the flooring used in the experimental design.

where x = skin surface temperature and y = CMT score. CMT scores were recorded as described by Sargeant et al. (2001), in which 0 is a negative result, 1 (+) is a trace, and then 2 (++) and 3 (+++) are positive results. This relationship demonstrates that IRT can likely indicate if an animal has a relatively high somatic cell count and may perhaps be used for screening or monitoring purposes instead of conducting a CMT. Polat et al. (2010) found that udder skin surface temperature, when detected by IRT, did not differ in specificity or sensitivity from a CMT score. Hovinen et al. (2008) found that IRT could detect changes in udder temperature when animals were induced experimentally with mastitis and that this temperature correlated with rectal temperature. However, local signs of inflammation were observed before increases in udder temperature. Thus, they concluded that IRT might not be fully effective as a method to predict mastitis, but it has potential for monitoring, and more research is needed.

A challenge with IRT is to determine exactly where to measure temperature on the udder and how to analyze this data, as udder surface temperature is not uniform. Metzner et al. (2014) found that a “polygon” approach was better at detecting temperature changes when compared to “rectangles” or “lines” when measuring the surface of the rear quarters. The polygon method involved outlining the rear quarters and analyzing the surface area within the outlines. The rectangle method outlined portions of the rear quarters, starting just above the bases of the rear teats and ending at the height of the stifle joint. Finally, the line method simply drew lines along the outside borders of the rectangles mentioned previously. The most meaningful value when using the geometric analysis tool “polygon” was the descriptive parameter “maximum.” The polygon approach with the measurement of this maximum value yielded the strongest correlation between rectal temperature and the rear quarters’ surface temperatures, along with the highest sensitivity and specificity (1.00 and 0.96, respectively). The researchers found that, although the “line” method had the smallest standard deviation (SD), that also meant it detected less significant temperature differences. The SDs for the “polygon” and “rectangle” approaches were not statistically different.

The Dairy Focus Group conducted a study using IRT in mid-April 2016. We took thermal images of 25 mid-lactation Holstein cows (136 ± 54 DIM) over a 4-day period. The study was conducted at the University of Illinois Dairy Research Farm in one of its tie-stall facilities. Thermal images were taken of the face, rear and right side (if facing the rear of the cow) as well as rectal temperature, heart rate and respiration rate. Seven points from the face, four points from the side and five points from the rear (Figures 1, 2, and 3 respectively) were selected for temperature analysis. Images were examined using FLIR Tools (version 5.9.16284.1001) and the temperature of the selected points were recorded. All data was consolidated into Excel 2016 and separated by angle of view (face, rear, and right) and then by specific points. Cows were divided into two groups by temperature, where Group 1 contained cows with rectal temperatures below 102.3° and Group 2 contained cows above 102.3°. No difference in rectal temperature was observed between the two groups. 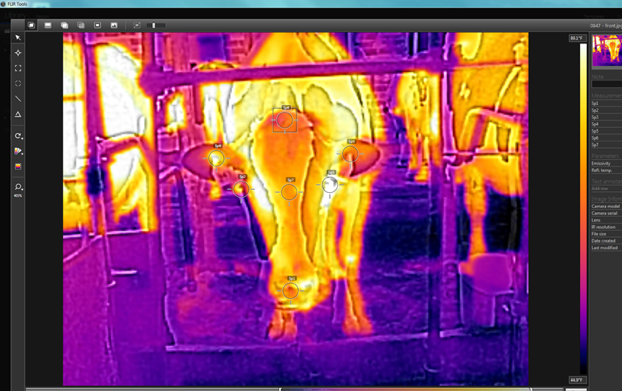 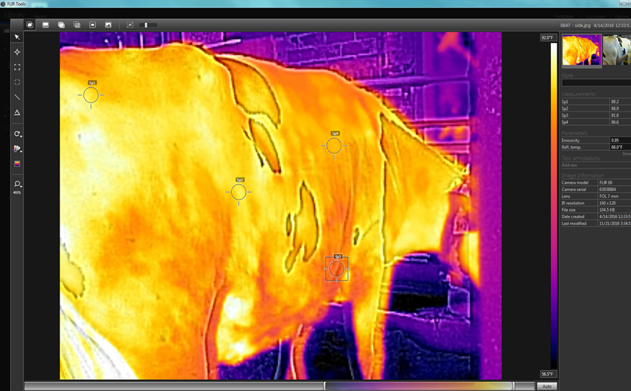 Figure 2. IRT sites on the cow’s side. 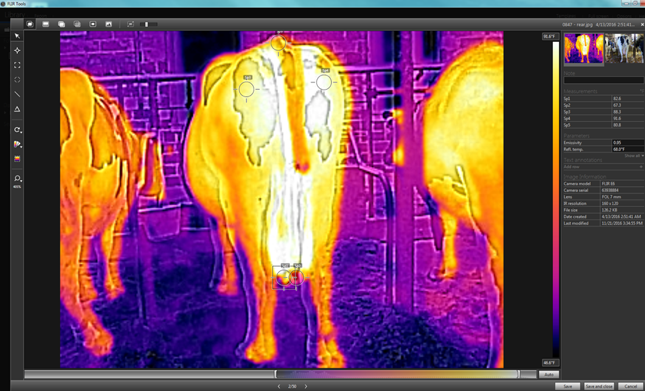 Data was then analyzed and compared point-by-point with rectal temperature to determine any correlations. Among the points measured in our study, the highest coefficients of determination (r2 values) were found for the poll (Figure 4) and left ear (Figure 5) (r2 = 0.03 and 0.04, respectively). The ears and poll of the cow are involved in thermoregulation of blood supply to the brain, and temperature readings at these two locations have the potential to be strong indicators of irregular thermoregulation (Robertshaw 1985). 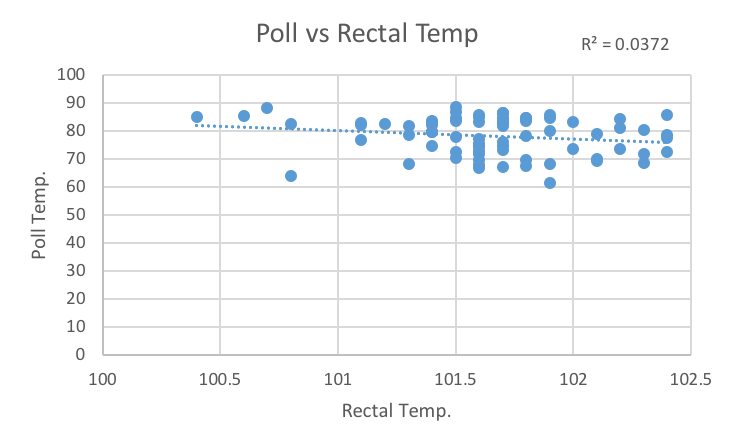 All other points had relatively lower r2 values, but still offer opportunities for additional research. As mentioned previously, ocular temperature has been strongly correlated with rectal temperature, and coupled with environmental factors (air flow, ambient temperature, direct sunlight, etc.) can be a strong indicator of disease. With the current trend towards automation and larger herd sizes, being able to establish an automated system capable of monitoring cow health non-invasively could be very beneficial for the producer. 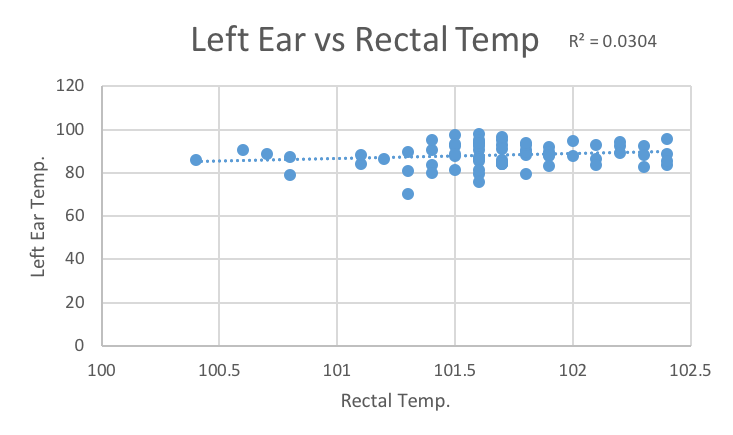