Starch is a nonstructural storage polysaccharide in plants, made solely of glucose linked in alpha (1,4) and (1,6) linkages. Amylose consists of linear, helical chains of roughly 500 to 20,000 alpha-D-glucose monomers linked together through alpha (1-4) glycosidic bonds. Amylopectin molecules are huge, branched polymers of glucose, each containing between one and two million residues. Nutrient Requirements of Dairy Cattle (NRC, 2001) does not specify a direct requirement for starch; however, previous research indicated that starch content should be in the range of 25 to 30 percent of dietary dry matter for lactating dairy cows. The main function of starch in the diet is to provide energy to the rumen microbes, while rumen-degradable protein (RDP) provides a source of ammonia, which is also required for the rumen microbes and protein synthesis. Starch is also important in the production of volatile fatty acids, specifically propionate. Once produced, propionate is then transported to the liver and converted into glucose. Glucose is then converted in the mammary gland to lactose, the primary sugar in milk.

Amino acids, on the other hand, are smaller molecules that are the building blocks of proteins. Dairy cows and many other animals require certain amino acids in differing amounts. These amino acids are termed indispensable amino acids (i.e., essential amino acids), and they include arginine (Arg), histidine (His), isoleucine (Ile), leucine (Leu), lysine (Lys), methionine (Met), phenylalanine (Phe), threonine (Thr), tryptophan (Trp), and valine (Val). These amino acids are either supplied through the diet or synthesized by the rumen microbes. Dairy cattle diets are most limiting in methionine and lysine. Often, those amino acids are protected by encapsulation prior to being fed so that they do not degrade easily prior to reaching the small intestine, where they are absorbed and utilized. Over 60 percent of dietary protein is fermented by the microbes in the rumen, while the other 40 percent bypasses the rumen and is utilized in the small intestine.

Amylose and amylopectin are broken down mainly by rumen microorganisms, which play an important role in the rumen. The proteins produced by these microorganisms are the main protein source for the ruminant. Energy and nitrogen availability in the rumen are the most important factors for microbial growth. Different types and families of microorganisms, such as bacteria, protozoa, anaerobic fungi, and methanogens, play different roles. Anaerobic fungi help cows assimilate fibrous feeds and gain energy from fermentation of those feeds. They are not nutritionally fastidious and will grow in pre-reduced medium of simple composition with ammonia as the main source of nitrogen. Methanogens in the rumen are much less diverse than other microorganisms, with only eight species. The protozoa in the rumen are important for their role in digestion of certain products. They assist in the metabolism of plant materials, lipids, and proteins. All of these microorganisms work together to break down and metabolize starch and proteins in the dairy cow.

The processing of different types of starch can have an effect on the amino acid status of the cow as well as the rate of digestion. The endosperm type also has a great effect on rumen starch fermentability, which can vary from 30 percent to greater than 90 percent depending on the type and physical form of grain. In addition to the endosperm type, processing methods such as rolling and steam-flaking, ration composition, and the physiological status of the cow can affect fermentability. These factors can also affect the passage rate of starch from the rumen. In terms of corn, a floury or more open endosperm is more digestible than a non-floury corn hybrid. Floury starch refers to the amount of white-colored starch granules found in the kernel. This type of kernel is surrounded by certain proteins also known as prolamins or zeins. The vitreous areas contain more zeins, which bind starch more strongly than other types. According to research from the Ohio State University, reducing particle size of corn grain can increase starch digestibility by increasing surface area for bacterial or enzymatic degradation. Recently, there is evidence that treating corn with enzymes (i.e., amyloglucosidase 1) can induce the occurrence of pores in starch granules of the endosperm, allowing for improved fermentation in the rumen (Figure 1). 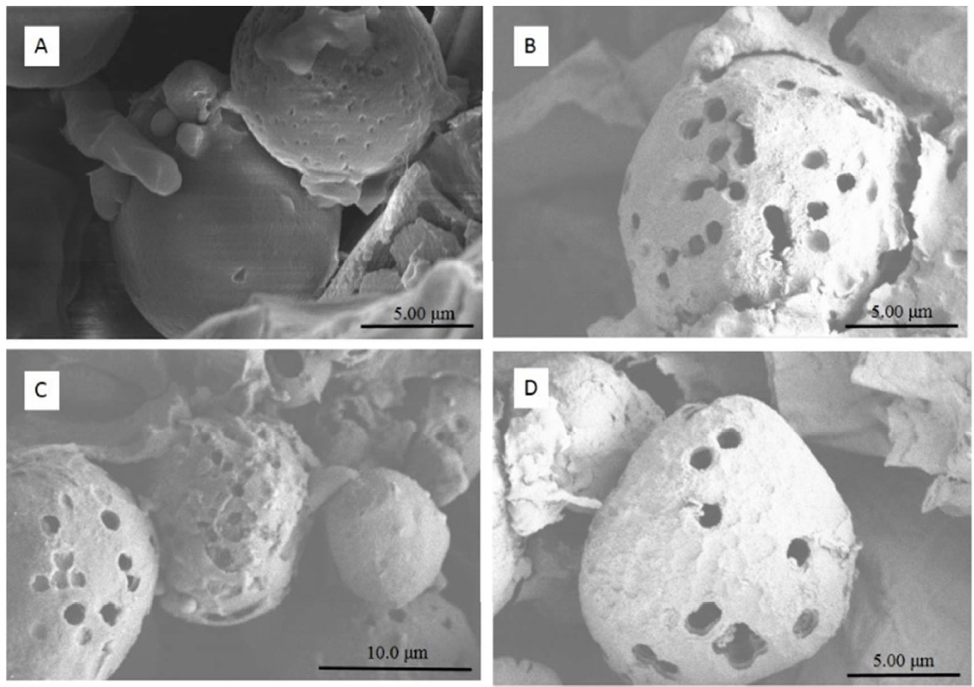 Figure 1. Scanning electron microscopy of corn starch granules after 30 days of ensiling. A: Control. B, C, and D: Amyloglucosidase 1.

The amount of starch has been shown to affect the amino acid content in the rumen as well. Recent research has indicated that feeding more starch increases microbial protein synthesis as well as the efficiency and use of dietary N. In turn, as long as RDP is adequate, milk protein yield will increase unless production is decreased. It has been shown that increased starch in the diet can lead to increased use of N, allowing dietary CP to be reduced to around 15 percent of dry matter. However, rations too low in CP can reduce protein synthesis, while feeding too much CP can affect aspects of health and fertility such as reproductive efficiency. Increasing the supply of energy to the mammary gland can stimulate mammary protein synthesis and milk protein production.

Increasing starch supply, either by increased feeding or by increasing rumen and intestinal digestibility of that which is fed, can be expected to increase amino acid availability to the mammary gland and other peripheral tissues because of variable increases in intestinal amino acids supply (due to increased microbial protein synthesis), a reduced need for amino acids for glucose synthesis, and a reduced need for amino acids as energy sources for splanchnic tissues.