Dairy producers are constantly looking for ways to increase profitability, especially in times of low milk prices. Milk volume and quality are directly associated with dairy farms’ gross income. Minimizing health problems is one of the key factors to profitability. High milk yield is the outcome of healthy and non-stressed cows. Last July, at the national meeting of the American Dairy Science Association in Orlando, Florida, Dr. Lombard and his collaborators revealed pieces of the 2014 National Animal Health Monitoring System (NAHMS) survey. Study data were collected from 1,261 dairy operations in the nation’s top 17 dairy states. The most prevalent health problem in dairy herds was mastitis, with 24.1 percent of cows affected by the disease. This number was 16.5 percent in 2007. A high number of cows with mastitis most likely means that more antibiotic products are being used to treat those animals.

In 2015, the USDA and FDA released the United States National Residue Program Quarterly Report (April-June 2015) for antibiotic residues in meat, poultry, and egg products. The three most prevalent antibiotic compounds found were ceftiofur, penicillin, and sulfamethazine. Carcasses of dairy cows yielded a higher number of positive samples (54 percent or 132/241 samples) when compared with beef cattle and others. Needless to say, those results raised a red flag in the dairy industry, among consumers, and in governmental agencies. In the same year, the FDA released results of the Milk Drug Residues Sampling Survey in raw milk. Researchers visited dairy herds that had at least one antibiotic positive sample at the slaughterhouse (targeted herds), but also herds that have never had a posi- tive case (non-targeted herds). In the targeted herds, 1.15 percent of the raw milk samples (11/942) were positive for antibiotic residue while 0.42 percent of the samples (4/955) were positive in non-targeted herds. Even though just a small percentage of the samples were positive, it was clear that targeted farms were more at risk (almost 3 times more) of having antibiotic residue in raw milk. Shortly afterward, the FDA proposed a final rule revising its Veterinary Feed Directive (VFD) with the goal of ensuring judicious use of antibiotics in dairy herds.

The VFD was released in October 2015 and will go into effect in December of this year. It changes the way veterinarians authorize the use of medicated feed additives considered medically important to humans. The VFD is based on two main points:

An example of how the VFD might impact your farm is the utilization of medicated milk replacers. Producers must use these products only for the duration approved on the label and not for continuous use in feeding. Dairy producers should talk to their veterinarians and establish a plan before December 2016. We know that one of the best ways to prevent the use of antibiotics in the herd is to reduce the number of mastitis cases.

Mastitis is the inflammation of the mammary gland and can be diagnosed by different methods. Clinical mastitis is usually diagnosed when farmers see altered milk (flakes) in the milking parlor when performing forestripping, or after milking when looking at the milk filter of the milking equipment. Subclinical mastitis can be diagnosed by sending a milk sample to the laboratory so that the amount of somatic cells (white blood cells) in the milk can be counted (SCC; somatic cell count). The National Mastitis Council (NMC) suggests that milk samples with a result of 200,000 somatic cells/mL of milk (linear score = 4) or higher indicate that the cow is trying to defend herself against a pathogen (usually bacteria) and therefore has mastitis. The SCC contribution from all cows in the herd can be easily accessed by the bulk tank SCC. According to the 2014 NAHMS survey, dairy farmers have been improving their milk quality in recent years, since bulk tank SCC dropped from 300,000 cells/mL in 1996 to 200,000 in 2014. It is important to remember that bulk tank SCC has been associated with antibiotic residue.

In order for mastitis to occur, the microorganisms have to reach the interior of the mammary gland. How does that happen? Remember, bacteria don’t jump or run. First, they need to colonize the skin of the teat. Infection usually occurs when the bacteria that are colonizing the teat are “flushed” or “pushed” into the mammary gland through the teat sphincter (orifice in the end of the teat). This process usually occurs at the beginning or end of the milk procedure due to milk reflux caused by air entry in the system when liners are not well adjusted to the teat of the cow. This is why it is so important to have clean udders at the milking parlor; it makes the job of the milkers to deliver a clean teat much easier.

Dairy herds have different milking procedures. Regardless of the milking procedure your farm adopts, you should make sure that all cows are being milked under the three most important conditions: Cows need to be milked with clean, stimulated and dry teats (Figure 1).

Figure 1. The three most important conditions for milking: clean, dry, and stimulated teats

Mastitis prevention is a team effort and therefore extra work should be done to ensure
that every member of the team gets the same message. For example, people have different impressions and opinions of what is a clean and dry teat. Improving communication in the milking parlor will reduce or eliminate variation. One way to do so is to is by scoring teats for cleanliness and dryness. Pass a swab or clean dry paper along the teat end just after preparing the cow and just before attaching the unit to the cow. If the swab has residues of pre-dip or organic material (dirt) you would give that teat (quarter) a score of three (3). If the swab has no residue you would give that teat a score of zero (0). You should not have more than 20 percent of teats with score 3. Make sure to evaluate 10 percent of the cows in a pen or at least 15 cows to get a representative sample. Show the results to your milkers and explain the difference between “clean and dry” and “dirty and wet”. By doing that, you will help your milkers ensure that the end of the teat is not contaminated with bacteria and therefore will prevent new infections (mastitis).

What is the mastitis prevalence in your herd? Are you reaching your goals? By sending monthly individual milk samples from your cows to the lab for SCC screening you can easily answer that question. Figure 2 shows a representation of the SCC (linear score) of your cows (filled circles) this month (y axis) and last month (x axis). (A video showing how to generate such a report using Dairy Comp 305 or PCDart is available from our YouTube channel at https://www.youtube.com/watch?v=u5jB2PggdkY)

You can see that one cow had a low SCC last month, but this month had a high SCC;
we will classify her as having a new infection. Cows that had a high SCC in both months (five in this example) have chronic infections. Healthy cows (two in this example) never had high SCC, and cured cows (two in this example) will be the ones that had lower SCC this month when compared with the SCC for the previous month. The table in the figure shows you the percentage of your cows per quadrant. Most dairy management software can make the reports automatically for you. With these numbers in hand it is time to check if you are achieving your goals (see “Take Home Message”, below). It is vital for antibiotic residue avoidance and low SCC (low mastitis) that you consult with your veterinarian for a comprehensive and successful milk quality program. 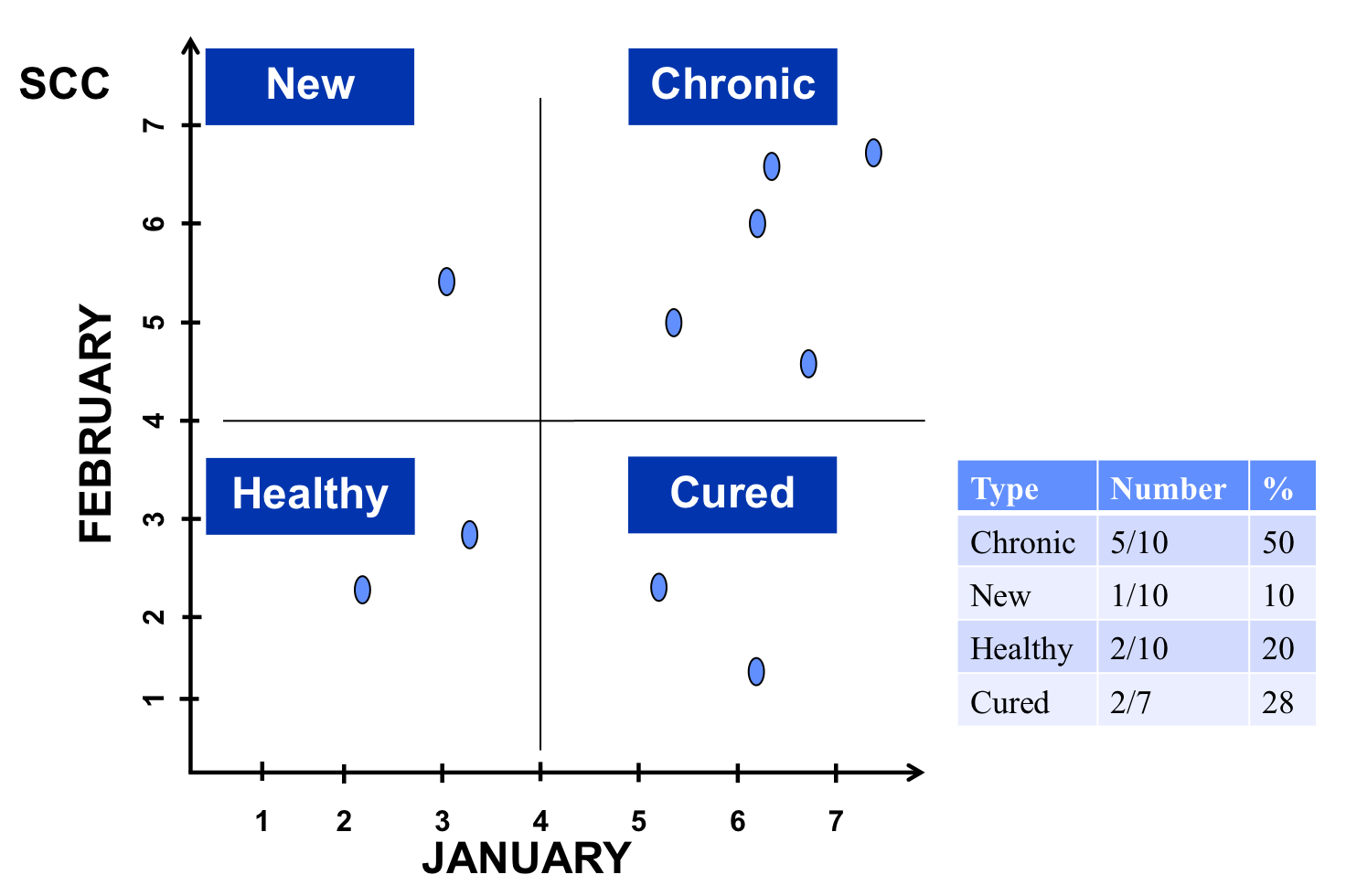