Reproduction is an important aspect in the profitability of any dairy production system. Setting up a reproduction program that balances a cow’s time spent in the most efficient stages of lactation with maximizing the number of female calves born to serve as replacements to the herd can be challenging; however, this balance will directly impact farm revenue.

Fertility in dairy cows reflects the cumulative influence of metabolic, endocrine, and postpartum health components that have been modified and exaggerated by selection for high milk yield. The interplay of nutritional status and reproductive tract health postpartum are just a few factors that determine success in A.I. services.

Cows that enter a period of negative energy balance (NEB) during early postpartum tend to have a slower uterine tissue repair rate. This leads to a delay in resumption of cyclicity following calving, and reduced oocyte quality and corpus luteum function. Significant body condition score (BCS) losses postpartum, which are indicative of NEB, can influence a cow’s ability to reach reproductive targets. Cows that lose more than 0.5 units in BCS between calving and day 28 postpartum are slower in resuming ovulation when compared to cows that lose 0.5 units or less in BCS. Uterine infections such as endometritis and metritis play a role in reproductive performance as well. These infections interrupt the regression of the corpus luteum and tend to extend the luteal phase following first ovulation postpartum. Paying special attention to cows in the transition period can help to minimize nutritional and reproductive tract problems.

Recently, the Dairy Focus Team visited several dairy farms throughout Illinois. The goal of our visit was to compile a dataset to help producers find out where they stand in comparison to other dairy producers throughout Illinois. Based on the data, the team plans to suggest practices each unique farm can implement to reach their production goals. A portion of each visit was related to assessing reproductive performance of the farms. 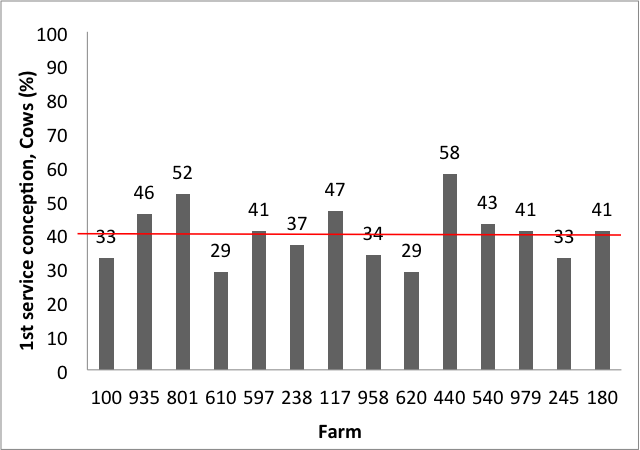 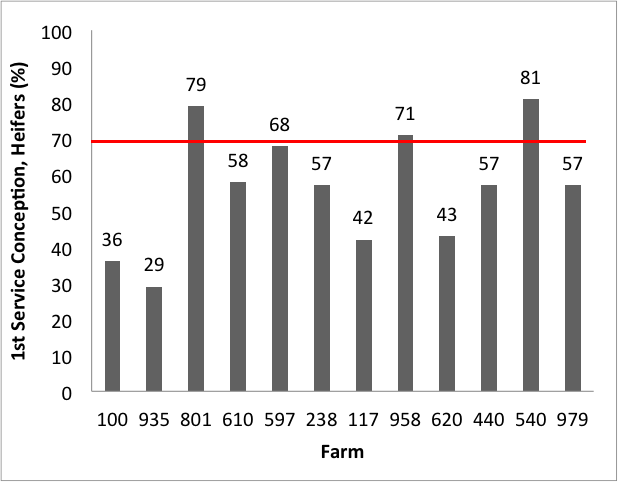 A wide range of factors can influence first service conception rates. A common cause of low conception rates in cows is reproductive tract infection. Poor hygiene in calving areas can contribute to an increase in retained placentas, which slow reproductive tract recovery postpartum. Estrus detection errors, inaccurate timing of insemination, or poor insemination technique can also lead to decreases in conception rates. The interval from calving to breeding also influences conception rates. Improved fertility can be achieved by evaluating and making adjustments to the herd’s voluntary waiting period (VWP). The VWP is the time in early lactation when cows are intentionally not inseminated, even if they show signs of being in heat. In our study, the VWP reported by farmers was 63.57 ± 16.57 days following calving. Implementing the appropriate VWP will allow cows to recover from postpartum negative energy balance and will increase fertility. The individual farm’s conception rate should be considered in determining the VWP. Usually, farms with higher conception rates will be able to have shorter VWPs. 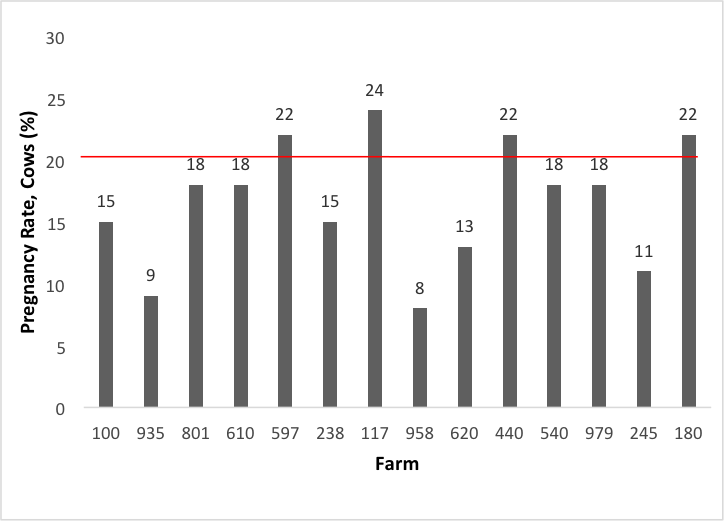 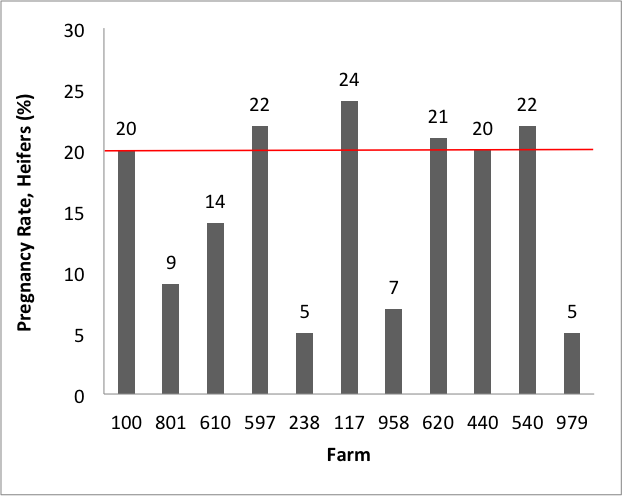 Low pregnancy rates result from several factors that reflect cows’ poor fertility. The two main factors involved are the aforementioned conception rate, and the ability to accurately detect when cows are in heat. Visual heat detection is labor intensive and requires extensive skill, making it a limiting factor in dairy management. Good farms are able to detect at least 50% of eligible cows in heat. The difficulty lies in the fact that lactating dairy cows may show few signs of estrus. Research shows that high producing cows can show signs of heat for less than one hour during the night.

Seasonal variation in first service conception rates and pregnancy rates may be the result of environmental factors. Heat stress can account for low rates in the summer months, when high ambient temperatures increase the incidence of silent heats and anestrus in dairy cattle. Identifying cows in estrus and breeding them at the appropriate time is essential to increase pregnancy rates.

Producers can utilize reproductive aids to improve their herds’ first service conception rates and pregnancy rates. Implementing a synchronization protocol such as Ovsynch®, which uses gonadotropin-releasing hormone (GnRH) and Prostaglandin F2α (PGF), can eliminate the dependence on visual detection of estrus by replacing heat detection with timed artificial insemination (TAI).

The Ovsynch® protocol begins with a GnRH injection given to cycling cows at a random point in their estrous cycle. This injection has one of two purposes depending on the stage of the estrous cycle the cow is currently in. If the cow has reached the stage in her cycle where a dominant follicle is present on the ovary, GnRH will induce ovulation of the dominant follicle and a corpus luteum (CL) will then form (new CL). If the cow does not show a dominant follicle on the ovary, GnRH will promote continued growth of the immature follicles present. The cow will already have a CL (old CL) present on the ovary from a previous ovulation.

Traditionally, seven days following the GnRH injection, cows are given an injection of PGF. Prostaglandin will act to regress the CL present on the ovary. Regression of the CL tissue will cause a decrease in blood progesterone levels and blood estradiol levels will increase. This hormone cascade causes the cow to enter the follicular phase of the estrous cycle where a new dominant follicle will develop from previously selected follicles. Then, 48 hours after the PGF injection, a second dose of GnRH is given to the cows in the Ovsynch® protocol. The second injection of GnRH induces ovulation, and TAI can be performed 12 hours following the last GnRH injection. Figure 5 depicts the traditional Ovsynch® protocol.

Recent studies have shown that embryo quality can be improved when the period of follicular dominance is shortened. These studies have decreased the interval between the first GnRH injection and the PGF injection to five days instead of the original seven day interval. Figure 6 shows a five day Ovsynch® protocol.

One of the major concerns about reducing the timing between injections is the lack of complete regression of the early CL. Corpora lutea less than six days old are known to be unresponsive to the effects of PGF. The exact mechanism for failure of the early CL to respond to PGF has been hypothesized but is still to be determined. If a dominant follicle is present at the time of the first GnRH injection, then the follicle will ovulate in response to this injection and a new CL will form in its place. In the five day Ovsynch® protocol, the newly formed CL will be only five days old by the time the PGF injection is given. To overcome this problem, two doses of PGF need to be given on day 5, 12-24 hours apart.

An increase in conception rate from 25% to 35% can represent a net increment profit of $25 per cow per year, according to researchers from the University of Wisconsin. The UW researchers have developed an on-line tool that allows farmers to input their own data and simulate their farm’s profitability by using different reproductive synchronization protocols (http://www.dairymgt.info/tools.php).

What should producers do if they are not measuring up to the rest of the dairy industry?