It’s been a few months since the last time I was visiting with dairy nutritionists in California. I would like to highlight some points from our conversations for everyone to keep in mind.

Crude protein (CP) can be determined by multiplying the nitrogen content of feedstuffs by a constant factor of 6.25. Research has reported that increasing dietary CP from 16.5 to 18.5% does not elicit milk yield or protein yield increments. Therefore, dietary CP is a poor predictor of cow performance. Cows consuming a diet with 18% CP could either be yielding 22 or 45 kg/day (48 or 99 lb/day) (Figure 1). 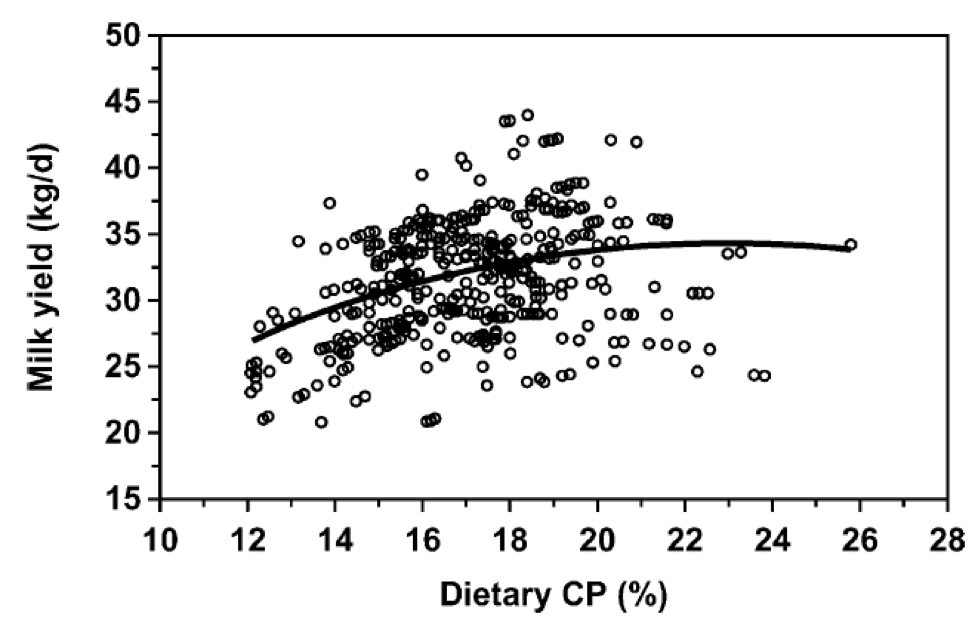 Figure 1. Prediction plot of the relationship between milk yield and dietary CP percentage for lactating dairy cows. (R2 = 0.19). Adapted from: Ipharraguerre, I. R., and J. H. Clark. 2005. Varying protein and starch in the diet of dairy cows. II. Effects on performance and nitrogen utilization for milk production. J. Dairy Sci. 88:2556–2570.

Dietary CP consists of rumen-degradable protein (RDP) and rumen-undegradable protein (RUP). Rumen-undegradable protein and microbial protein (from RDP) are the most important sources of absorbable amino acids for the animal; together, they make up the metabolizable protein (MP). We recommend feeding cows no less than 1,200 g/day of MP during the pre-fresh period (~30 days before calving). Make sure that the dry matter intake (DMI) achieved on your farm is sufficient to provide enough MP. The DMI is dependent on many factors, including cow’s body weight and facilities. We suggest focusing on the quantity (grams) of MP delivered, independently of the intake. For instance, typical DMI can vary between 12–16 kg/day (26–35 lb/day). If in the lower range, you may consider using better sources of protein. If in the higher range, you may be able to reach 1,200 g/day of MP without a specialty bypass protein product.

Beyond physiology, feeding amino acids can also have a positive environmental impact. Diets with too much protein (CP and RDP), in addition to increasing milk production costs, can negatively affect the environment. Although dairy cows’ CP efficiency is greater than in other ruminants, they excrete up to three times more nitrogen in their manure than in their milk, resulting in environmental problems related to nitrogen pollution. For example, when cows are fed diets high in CP, large amounts of NH3 are produced in the rumen, absorbed into the blood, converted into urea in the liver, and excreted in the urine. The bacterial enzyme urease, which is present in the manure, can rapidly hydrolyze urinary urea and release it into the environment.

We also talked about mycotoxins during the visit. Usually, clays are used as a feed supplement to reduce the symptoms of aflatoxin contamination in lactating cows. Recently, our group has shown that clay affects the degradability of feedstuffs, but in a positive way. We reported that aluminosilicate clay changes the way the cow degrades feedstuffs. We tested the degradability of six feedstuffs—dried alfalfa hay, grass hay, wet brewer’s grains, ground corn, corn silage, and soybean meal—in cows fed diets containing no added clay or clay comprising 1% or 2% of dietary dry matter. Because the material attracts and binds positively charged ions, clay can make the rumen less acidic. This is important, particularly given the popularity of increasing grain concentrates in TMR feed, which can lead to subacute ruminal acidosis (SARA). In a 2016 study from our group, cows challenged with excess wheat in a TMR diet produced more and higher-quality milk and had higher rumen pH when fed bentonite clay at 2% of dietary dry matter. In summary, clay has several benefits: it reduces aflatoxin toxicity, acts as a pH buffer, and improves the degradability of some feedstuffs. Before using clay in your cows’ diet, it’s important to ensure the specific clay product has been tested.